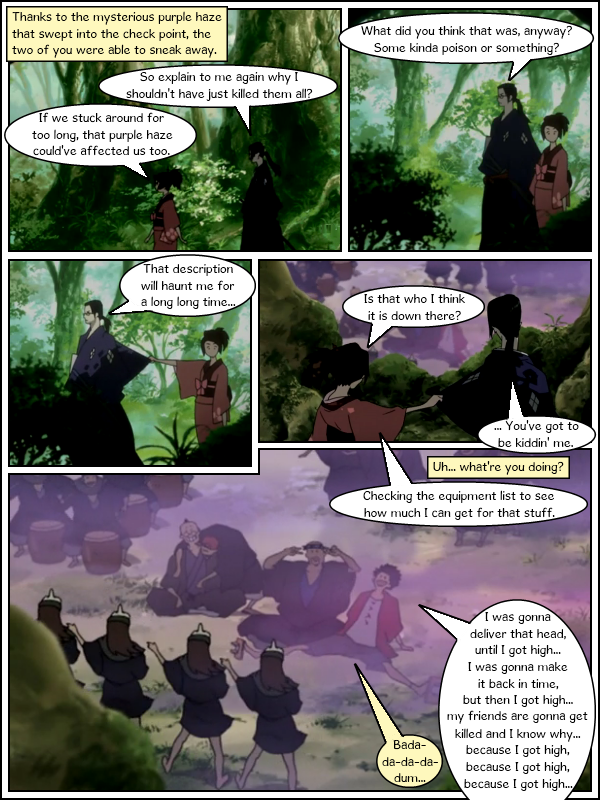 In the universe the players inhabit, Samurai Champloo does not exist. That's the premise of this entire comic, after all. But most of the other things we know and love (such as sword chucks) do, albeit modified by the lack of Samurai Champloo:

-Shinichiro Watanabe is known mostly for directing Cowboy Bebop.
-Without the success of Samurai Champloo, katanas never really became all that popular past 2010.
-Nerdy guys still make YouTube videos of themselves debating samurai vs spartans. That hasn't changed.
-The use of hip-hop music with samurai swordplay was popularized by Afro Samurai.
-Initial D was licensed by 4Kids for a short period before getting picked up by Funimation.
-The major samurai-themed Anime series that pervades all of Japanese culture is Rurouni Kenshin, despite it never being as popular... for some reason.
-Luke is an avid reader of the screencap comic Notes & Nazis.
-DragonTrainer exists and is making a screencap comic based on Black Cat.
edit delete
User comments:
Guest (Guest) 22nd Apr 2021, 3:36 PM
/lol continue this please!
edit delete reply
Post a Comment